Basic knowledge of anatomy and biomechanics of the spine

The neurasthenia prevention through the Yumeiho therapy

Basic knowledge of anatomy, biophysics and biomechanics of the locomotor apparatus

Life has appeared and evolved under the continuous influence of gravity.

Because it is the most important force that influences the human body, gravity determines the movement characteristics of beings. All the other forces that intervene in the statics and dynamics of the body are the direct or indirect result of the interaction with the gravitational force.

The gravitational force always acts vertically, from up-side down. Against it, the internal forces act as one, in the opposite direction, from down-side up. The overcoming of the gravitational attraction force involves high energy consumption and a usage of the entire locomotion apparatus of all living beings.

Beings which live under water, where the effects of gravitation are diminished, use a clearly less amount of energy than those living on land (check Archimedes’ principle).

The Centre of Gravity

The gravitational forces act upon all structures and elements of the human body. Therefore, starting with the non-differentiated elements (atoms, molecules, cells) and continuing with well-defined structures (internal organs, head, arms, legs, etc.), gravitation has a “point” in which it exercises its action. For example, every atom in the structure of the upper limb is bowed to the gravitational force, but the resultant of all these forces will be situated in a “point” called the centre of gravity of the upper limb.

So: the reference point upon which the gravitational force acts is called the centre of gravity.

The positioning of the centre of gravity depends on the body’s position as well as on the relative position of the segments that it is made of. Through the summation of the gravitational forces which act upon all of its segments, it is obtained a resultant that will act upon the body as a whole.

Man’s centre of gravity, in normal conditions, is situated on the body’s vertical symmetry axe, in a plan parallel to the ground, which intersects the body at the lower abdomen level (about 3 cm. below the belly-button).

The notion of equilibrium is defined according to the body’s capacity of moving harmoniously or maintaining a static (stable) position. Equilibrium depends entirely on the position of the body’s centre of gravity.

Notions as: elevation, growth, flight, ascent define man’s struggle against the force that keeps drawing him back to earth.

It can be said that man spends a part of his life “lifting up from the dust” and the other one going back to it. That is because “from dust we were born and to dust we will return”.  The cry of the earth calls on us our entire life. During the millennia, man has adapted to this fight evolving even to defy (temporarily, to be honest) gravitational attraction.

For example, the nervous system (both the vegetative and central) has evolved adapting to the need for static and dynamic equilibrium as well as to the individual’s space and time orientation requirements.

The necessity of movement and stability has made the locomotor apparatus evolve, giving birth to precise laws of biomechanics.

The cardio-vascular system is perfectly adapted to the gravitational influence.

Both biophysics and biomechanics have accurately established the man – gravity interaction rules, the notion of equilibrium being indissolubly in relationship with the notion of health; that is because man’s center of gravity represents the referential point in man’s static and dynamic equilibrium analysis.

Here are some rules to be followed for an optimal equilibrium:

Still, the reality proves that in very few cases there are such things as optimal equilibrium conditions. The variations of the environment’s characteristics and of our capacity to adapt to them create significant equilibrium fluctuations, on both short (minutes, hours, days) and long term (months, years).

The measurements performed with computerized devices (“intelligent” scales) have proved the fact that when measured differentially (the weight distribution in the lower limbs, left –right), identical or almost identical values are rarely obtained (in about only 1% of the cases). The differences obtained are generated by various causes:

All these anomalies – disorders mentioned above may be congenital or/and contracted. Among those that are contracted we can mention: posttraumatic, degenerative diseases, acute pains (of the muscles, bones, ligaments, tendons, etc.), vicious attitudes and postures (professional, habitual).

In order to move, maintain his static and dynamic equilibrium, man uses an extremely complex architectural ensemble very well adapted to the action of the gravitational forces. The human body architecture is made of rigid sustaining elements (the skeleton, the bones) and of soft sustaining elements (muscles, ligaments, fascias, tendons, etc.). These elements form functional structures adapted to our needs of movement and of maintaining our equilibrium.

The most important element of our architecture is The Spine.

From both a physical and psychological point of view (as a space – time landmark), our being is structured around the spine.

The spine is the most important component of the bone skeleton (and therefore, of the locomotor apparatus). It serves as an anchorage point for all the other elements that form the human body. It is the central axis of our psycho – physical structure. As a result, its state will have an impact on our whole being.

The spine offers us the body symmetry and the movement direction. It surrounds and protects our communication systems (medulla spinalis/rahidian canal) and makes possible both our mobility and stability because of the overlying of multiple bone pieces (the vertebrae).

The spine, in its wholeness, must be understood first of all as an individual organ of the body (named in the specialty literature “axial organ”). The normal or abnormal functionality of this axial organ of the body impacts both the spatial dispositive and some morfo – physiological parameters of certain viscera found inside the rahidian canal (medulla spinalis, spinal nerves roots, vertebral artery, etc.) or inside the thoracic cavities (the heart, lungs, liver, stomach, intestines, etc.), therefore the spine has multiple purposes: sustaining, protection, formogenesis (it defines the form of our body).

The asymmetries found in the human body (position, form, tonus, volume, functional asymmetries, etc.) depend on the state of the spine, suggesting both the diagnostic and the manner of therapeutic approach.

The Yumeiho® therapy is conceived as a method of „putting in order” the spine as well as correcting, as far as possible, the disorders caused by its pathology and/or disfunctions.

For this, the approach is made from the outside to the inside ( the correction of the pelvine bones, and the lower limbs, these being the base, the fundament of the spine)and vice versa (the correction of the pathological curvatures of the spine or of the intervertebral joints disorders, with ulterior positive consequences on all the limbs, pelvine and scapular belt).

The symmetry, a decisive factor concerning our being (from an esthetic, biomechanic – functional, psychical point of view, etc.) is determined and defined by the morphological and functional characteristics of the spine.

One of the most important roles of the spine is that of generating and sustaining our verticality in the gravitational field, both in repose and motion.

Our verticality is also dependent on the place where the gravitational forces (which act upon all body segments) concentrate their action, more precisely on the centre of gravity of the human body.

So the spine’s equilibrium is given by the harmony of all forces that act upon it. A practical example would be the following: the paravertebral muscles (sacrospinous) situated on the right should effectuate the same action as those on the left, respectively the musculature of the anterior face of the trunk and abdomen accurately compensate the mechanical work of the sacrospinous muscles, etc. Any disorder that appears in the harmonious functioning of these structures results in the disturbance or even loss of equilibrium.

Yumeiho in prevention of athlete’s diseases 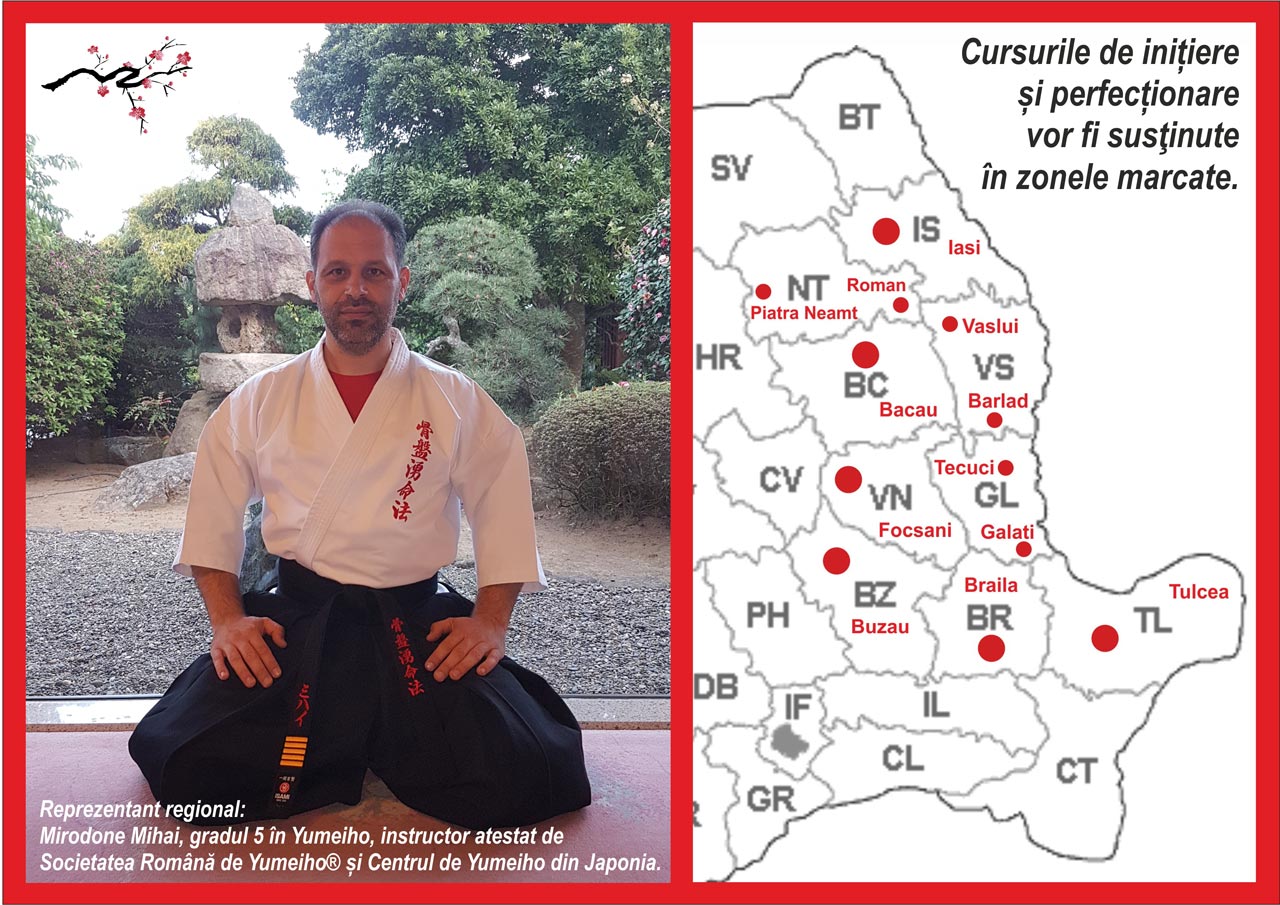